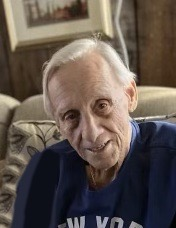 Please share a memory of Raymond to include in a keepsake book for family and friends.
View Tribute Book

Raymond Mininni, Sr., age 86 passed away on Sunday January 15, 2023. Born in Paterson, NJ, he lived there before moving to Wayne in 1975. Raymond was a barber and owner of Meadtown Barber Shop in Kinnelon, NJ for 47 years, retiring in 2007. Raymond loved playing basketball and played for the Railroad Construction Company in 1959, where he once scored 61 points in one game and was named most valuable player of the tournament. He was a member of the St. Anthony's Social Club in Paterson, and The Do-Good House Student Support Group in Totowa, NJ. He was an avid NY Giant and NY Yankees fan, loved going to Atlantic City , Las Vegas and enjoyed watching championship boxing. Raymond was well loved by his family and friends and he always had a great sense of humor.

Share Your Memory of
Raymond
Upload Your Memory View All Memories
Be the first to upload a memory!
Share A Memory