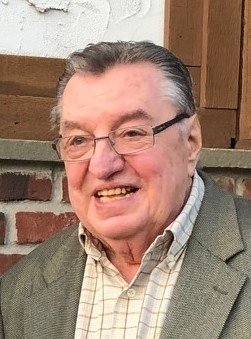 They started their family and moved from Paterson to Haledon in 1964 where they raised 3 children – Andrew, John, and Kathrin. He worked as an electronic mechanist until he retired in 2004. He enjoyed deep sea fishing, bowling, and watching the Mets. You could always find dad sitting on the deck watching the birds.

Opa was very proud of his granddaughters, Lauren and Megan, and all of their academic and personal achievements. Andreas is survived by his wife Theresa (nee Gaschler), his son, Dr. Andrew Ruisch, his son, John Ruisch and his wife Melissa, and his daughter Kathrin Sanford and her husband David and their daughters Lauren and Megan.

Funeral from DeLuccia-Lozito Funeral Home, 265 Belmont Avenue, Haledon, NJ on Thursday at 9 AM.  Funeral Liturgy at St. Paul's R.C. Church, 286 Haledon Avenue, Prospect Park, NJ at 10 AM.  Interment, Holy Sepulchre Cemetery, Totowa, NJ.  Visiting on Wednesday from 2-4 & 7-9 PM.  In lieu of flowers, donations to The Alzheimer's Association would be appreciated.

Share Your Memory of
Andreas
Upload Your Memory View All Memories
Be the first to upload a memory!